John Smith is a long time professional criminal and convicted shoplifter. But he got more than he bargained for recently, when trying to steal clothing from a high street retailer… 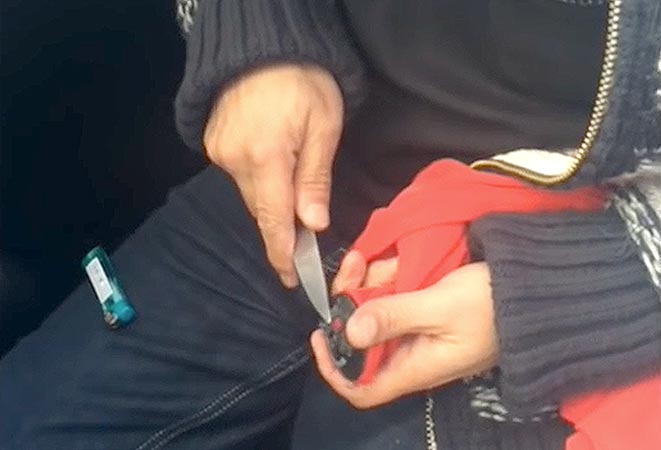 It was just another day of thieving, as far as John was concerned. This serial criminal and convicted shoplifter ventured into one of his favourite stores to steal some clothing, only to find himself confronted by a new EAS tag that not only got him detained, but subsequently has made him something of a growing celebrity in the retail community…

John had gone to JD Sports in Birmingham to illicitly remove tags and steal clothing. Unfortunately for him the store he chose was one of the soon to be 200 across the JD estate that has rolled out the new Concept Tag. Unfortunately for John he was detained by store security. What happened next was the stuff of legend.

Bragging to detectives that he could usually remove the tag, he agreed to show detectives how and have his attempts captured on camera. Over an hour later (you’ll be pleased to know the video contains just the highlights and has been cut to 2 minutes) not only has he failed to remove the Tag, he has destroyed the garment it was protecting – rendering it useless for resale – spilt the beans on how he deals with other tagging systems and injured himself in his ever more desperate attempts to remove the tag – Some way. Any way! He just gets more and more frustrated…

“I am delighted to see that our new tagging systems are causing criminals so much distress… We only wanted to stop them stealing clothing, but the fact that this fellow gets so frustrated and inflicts flesh wounds upon himself is frankly… a bonus!

We have signed an agreement with the makers of the Concept Tag to roll it out across most of our estate over the coming three years. We already knew from the impressive record of the Tag in extensive field trials that it reduced theft in stores by as much as 66%. And that should be taken in the context of our business already having industry leading shrink figures. No mean achievement!

This video insight into the trouble we are causing criminals, together with the information provided by the criminal himself around how easily he and his associates defeat other tagging systems (including those upon which we previously relied), is most gratifying.”

“We conducted extensive field trials with JD over two years, keeping retailers in the loop by divulging the results as they came through. We were so certain that the Concept Tag was the next huge thing that we gave people free access to all results. They could have been good or bad. That was how confident we were. And the results were unbelievably good!

However, it is only now, having published this video footage, that we seem to finally have caught the attention of retailers who increasingly understand that those fitting the Tag in the stores will not only see a reduction in their losses, but will be displacing the criminals to stores that do not have them.

As a result, I can say that over the last few months we have now had 10 major retailers enquire about the Tag all of whom are in varying stages of trialling it in their stores. I suppose, from that point of view, we owe John Smith a debt of gratitude!”

The Concept Tag was originally developed in Denmark although it did not really come to prominence in Europe until Agon partnered with the inventors and also JD Sports in extensive field trials.

Reductions in shrink of as much as 66% have not been uncommon experiences with those using the Tag, which depends on a unique patented design for security together with a powered detacher that cannot be purchased by criminals or be used without mains power. This as opposed to the established forms of EAS tag that can be defeated without detachers (simply go on YouTube to see how!) or for which detachers can easily be bought, over the internet, no questions asked…