Agon Systems’ clothing tag, named the Concept Tag, won the “Best Newcomer Award” this year at the annual Fraud Awards; the “Oscars” for the risk and loss prevention industry. 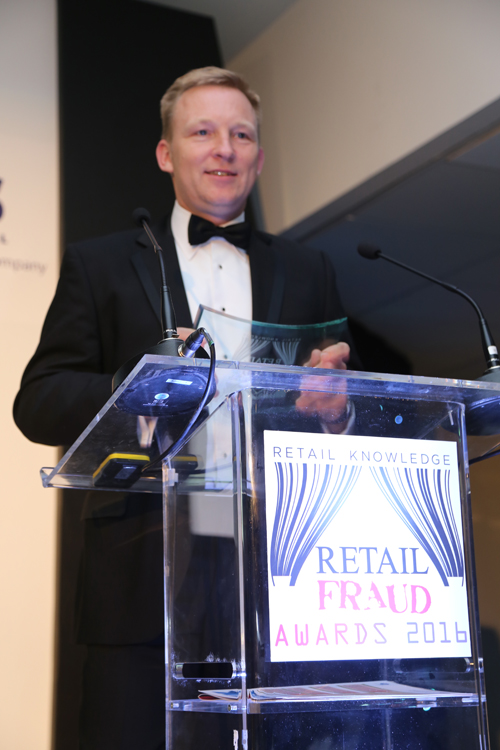 Awards are made upon the recommendation of an independent panel of judges made up of leading loss prevention figures from retail.

The Awards dinner, held fittingly at Premiership Champions Leicester City Football Club, was recognition for Agon’s revolutionary Electronic Article Surveillance system, which has been feted as the most exciting advancement in EAS tagging for over 30 years.

Agon Systems has been fighting retail crime for over 20 years and have sold over 200,000 EAS systems around the world. However, the Concept Tag did not come to prominence in Europe until Agon partnered JD Sports in extensive field trials.

JD Sports installed the tags in its brand new flagship Oxford Street store. When measured against an average store, losses of garments were reduced by 50%. However, with over 35,000sqft of retail space, spread over 3 floors deploying 65,000 Concept Tags, this was no average store!

JD were quick to realise that they were on to something special, extending the trial to seven regional flagship stores across the UK and Europe reducing like-for-like results (compared to their previous tagging systems) of almost 66%. And when would be thieves were caught on video complaining of how impossible it was to get the tags off garments, other retailers were quick to pick up the phone.

Agon are confident that all retailers using the Concept Tag will see reductions in loss of 50-70%, depending on how the product is used and how much stock is protected within a store with the tag.

It is also important to note that the Concept Tag does not only reduce loss figures, it also improves sales figures. This is due to the fact that there is more stock now available for customers to buy, which may previously had been stolen. Also the introduction of the Concept Tag reduces criminal activity within the store and therefore provides a more pleasant environment for customers to shop and a safer store environment for staff to work within.

To meet rapidly increasing demand, earlier in the year Agon closed down their main Swiss factory and moved its operations into a new UK office and warehouse based in Eastbourne. The company’s R&D facility remains in Switzerland for the time being.

The Swiss facility is responsible for bringing to market a number of new innovations over the next 24 months, these include a totally redesigned Mono Electronics Board that will allow Remote Service, Wireless Synchronisation and improved performance and lower energy usage. Additionally their developers will bring online a redesigned Receiver and Transmitter Electronics with many new features and new software for both customer and engineer interface.

The UK facility will hold between £750K -£1M worth of stock at any one time to support the growing customer base and to ensure that they can deliver what the client requires anywhere in Europe with 24-48hrs. This facility also has an area where engineers can pre-configure and test every EAS system that is sent out for installation, this means almost 100% success rates without any failures. From the UK facility they will also provide remote support to their products all over the world via their Agon software.

Managing Director of Agon Systems, Sean Welch commented: “Winning the Best Newcomer Award at the recent Fraud Awards is a fitting tribute to the hard work and determination of everyone at Agon to find and develop the best products in the industry.

“In the last 12 months alone Agon has increased sales by 40%. And with ten major retailers due to come on board with the Concept Tag in 2017, we expect a further growth of around 40% or more in the coming financial year.

“Agon is looking forward to a very bright future, with an industry leading product that will revolutionise the tagging market and see the Concept Tag become the tag of choice for the majority of retailers over the next 5 years. 2017 will see us launch the Concept Tag into the USA and we are excited about the opportunities that exist for us in this vast market. That’s good for us and it is good for our community here in East Sussex.”

For more information head to https://www.agon-systems.com